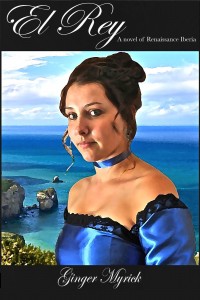 Welcome back to Becky’s Book Notes! Wow, it’s been a while hasn’t it? Today, I have a real treat. This is my first author interview, and I am pleased to introduce Ginger Myrick, author of El Rey: A Novel of Renaissance Iberia. Thank you Ginger for being here today. I have asked Ginger a few questions and here are her responses.

1. Tell me a little about yourself; where you grew up, your life, a typical day..anything that you would care to share with your readers.

I grew up in SoCal in a very different area than where we live now. I spent my school years in a suburban middle class neighborhood where everybody wore Vans, listened to Journey and Kenny Loggins on the radio, and made the exodus to the beach on the weekends.

I have now lived in a ski resort town about 40 miles east of Los Angeles for nearly 20 years but have NEVER been skiing. I have two grown sons, a 9-year-old husband, a dog and a cat, and my mom lives two blocks away. Bits and pieces of each of them were incorporated into the characters in El Rey to some extent (except for the cat!)

A typical day goes like this: I get up around 7, have a cup of coffee while I check my profiles for messages. I walk my dog, come home and answer all of my emails until about noon, do an hour of yoga then back to some actual writing while I facebook and Twitter to promote. I walk the dog again in the evening then more writing and promo until about 7:30. Then I read to wind down (something other than my own work!) and usually get to bed between 9 and 10. The rest of my time is spent picking up after my family.

2. Have any authors influenced your writing? How?

I began reading at an early age. My grandmother was also an avid reader, and she had boxes and boxes of books in her closet. That was where I was introduced to the world of historical fiction by such authors as Anya Seton, Jean Plaidy/Victoria Holt, Ayn Rand, and Colleen McCullough. James Michener, James Clavell, and John Steinbeck came later from my father, and my elder brother got me into Stephen King. I think my writing style is probably closest to Anya Seton’s, but some of the plot elements of my stories and the way they develop are reminiscent of Colleen McCullough. I would feel extremely honored to be likened to any of them!

3. I understand that you write historical fiction. Is this also what you prefer to read, or do you read a different genre in your spare time?

It is my preferred genre, but I can find something to love in almost any book. I read fantasy, sci-fi, dystopian, straight historicals, biographies. I am an absolute freak when it comes to Stephen King. I have only read a couple of stories by him that I didn’t love. But I think the real key is the storytelling and the talent for making a reader feel connected to the characters, no matter the genre. Those are the books I love to find. They help me escape from me!

My favorite part it the telling of the tale. I love the idea of putting the same old everyday words together to create something unique and my very own. I also love the research. I have found that I adore learning new things. It’s part of why I could never decide what path I wanted to follow when I was in school. If I could have made a career out of being a student, I would have done that.

But I detest the marketing and promotion part of it. I am reclusive by nature and don’t find myself very interesting, so trying to convince others that they should be interested in what I have to say is beyond me. And finding a balance between obnoxious and just right is extremely difficult. I always feel I come off as pushy. I’m still learning.

5. If given the opportunity to sit down and talk to your favorite author, what would you ask him/her? How would you answer it?

Hmm … this is a great question, Becky, and I had to think about it a long time. I actually left it for last, and I’m still mulling it over as I answer. It is between Jean Plaidy, whose real name was Eleanor Hibbert, Ayn Rand, and Colleen McCullough. I’m not sure the questions I would ask would be writing related.

The first two have passed away but led very different lives. I suppose I would ask Ms. Hibbert how she managed her research. Back then it would have been a very daunting prospect to have to physically go to her resources as opposed to just summoning them on the computer. With Ayn Rand I would just like to hear her talk about her experiences. She led an extraordinary and somewhat charmed life, although she became obsessed with her Objectivism philosophy in her final years. And I would like to just sit down and have a female bonding session with Colleen McCullough. She has like four degrees in very dissimilar areas, even a PhD in neuroscience. But despite having such a brilliant mind, she seems to be such an earthy, unpretentious sort of woman.

And although I would be flattered beyond giddy if anyone would like to do the same thing with me, I would probably have to wake her up after about 10 minutes so boring is my life!

6. At what age did you start writing and when did you decide on writing as a career choice?

I have written poetry, songs, and short stories my entire life but never aspired to anything grander. I began writing El Rey on November 29, 2009 (I was 44 at the time) and there was actually no choice in the matter. I call the whole thing a Divine Inspiration. Even now when I write, I still feel that I am merely the instrument, and I have yet to figure out where it is all going.

As far as the career part of it … well, all I can say is that I’m fortunate that my husband has a good job and doesn’t depend on me to contribute. Some other writers whom I have met are actually trying to pay their bills or quit a second or third job. I don’t know how they do it and admire them for their tenacity. I think that sort of pressure would take the pleasure right out of it for me.

7. Do you incorporate any of your favorite things, places, or hobbies into your books?

I always use my own interests in my writing. The singing, cooking, horses, dogs, interest in plants, needlework, are all things that I love. I have never been to any of the places except on the internet, so all of that was purely elaboration upon wishful thinking. But I did use the pictures as a starting point to describe the locations. I find that if I write what I know, I convey it convincingly.

8. What movie (if any) do you flat out refuse to watch no matter how good people say it is? What book do you refuse to read? Why?

I don’t like to watch movies that are too teeny bopper, like the Twilight series. Ditto for the books. I did venture to watch The Hunger Games but was left unimpressed. I thought they tried to make it too grandiose for what it was. I much prefer The Running Man (again Stephen King.) I also have trouble with time travel and highlander romances. Something about the time travel is never quite convincing enough, and the highlander books just seem forced. I don’t like anything with graphic or gratuitous sex in it, so 50 Shades of Gray is also out. I cannot read Tom Clancy, but his books make fantastic movies!

9. Do you have a favorite character either from your own work or another author’s?

This is also a tough question. So many to choose from! I really love Iñigo from El Rey. He represents the ideal father, something I never really had. The largest part of him comes from my grandfather, and he also has attributes of an uncle who was very dear to me with hints of my two brothers. Now that I think about it, he is also very much like Atticus Finch from To Kill A Mockingbird, whom I also adore.

10. Tell us a little about your most recent protagonist.

I released my second novel at the beginning of November. It is titled The Welsh Healer and is about a young girl who is forced from her childhood home by the Welsh uprising against England in 1400. She is endowed with a mystical healing gift passed down through an ancient line of healers. She has been told her entire life that she is the fulfillment of a prophecy and destined to preserve the bloodline of kings. The character was largely based on a new friend, Arleigh Johnson, who runs Historical-Fiction.com. Her picture is even on the cover.

11. What is the setting of your current work in progress and when can we expect to see it?

My WIP is set in Manhattan during the Gilded Age (1874.) It’s about a girl who emigrated from Ireland and works for a well-to-do lady in a fancy neighborhood. It is a Pygmalion/My Fair Lady type of story with a twist. I hope to have it done at the end of January or February 2013.

Thank you again for being here Ginger.

Have you read a book that seemed to stand out in your mind, long after the book had ended? The debut novel by Ginger Myrick, El Rey: A Novel of Renaissance Iberia, did that for me. I found myself wondering about the characters long after the end.

Set in 16th century Portugal and Spain, El Rey is rich in characters that will touch your heart, with the core as a love story between Inez Garcia and El Rey. Inez is an outspoken daughter of a wealthy merchant and El Rey the sea captain and nephew of the King of Portugal. It begins with the story of Inez as an elderly woman telling her great-granddaughter the story of herself from a child of 11 to adulthood and of El Rey. They meet at a party in his honor and strike up a friendship. Inez vows that she will never love another and El Rey tells her he will one day ask for her hand in marriage.

This is a sweeping saga of the story of her mother, Joanna, her father, Inigo, and others that are important in her life. Interwoven in the main body of the work are four narratives that move Inez’s story.

As a historical fiction reader and writer, I can appreciate the amount of research in this novel and it is meticulously accurate and even more important, not preachy. It is interwoven seamlessly into the story. The first impression I had however, and it continued throughout, was the author’s use of imagery. The reader is there, they can smell the sea, hear the seagulls. I consider her very masterful with description. I don’t want to give too much away because my words could not substitute for reading this book. I highly recommend it. I rarely give a 5 star review, but I would rate this up there with the masters of this genre.

Have you read a good book lately? Please share your thoughts. I appreciate all comments and would like to hear yours. 🙂

6 thoughts on “My First Interview With Ginger Myrick”